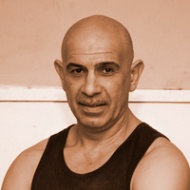 Shihan George Kolovos is one of the industries most influential and leading martial artists; he commenced his martial arts career in the Kyokushin discipline of Karate in the March of 1975.
Classes: Muay Thai, Boxing, BJJ, MMA, Judo, Kettlebell, Strength & Conditioning.Vaults 5,6,9,10 Banana Alley, 367 Flinders St, Melbourne.
www.melbmartialarts.com.au

Discipline and passion are the key to successful training and results... Shihan trained six days a week at the then head quarters of Kyokushin Karate, which was on Albert Street in Brunswick. He swiftly progressed through the ranks, obtaining a black belt in two and a half years, a process which ordinarily takes at least 5 years. By the time George had felt it necessary to create his own centre focused solely to martial arts, he had several styles of martial arts in his arsenal and various national titles for both Kyokushin Karate and Kickboxing. From humble beginnings renting a room at Melbourne City Baths, Melbourne Martial Arts now operates as a nationally renowned and internationally standard independent training dojo.
However, it was when he ceased focusing on his own personal martial arts career and began focusing on the training of his students that his career in the martial arts industry really began to flourish. Since focussing on training his students, nationally renowned martial arts 'Blitz magazine' has named him Instructor of the Year, and he has taken many of his students to international tournaments in Japan, Thailand, China, Dubai, Iraq and New Zealand.

George Kolovos is an ambassador for the martial arts both in Australia, promoting Brute Force Professional Muay Thai Ring Events, and internationally, raising awareness of Muay Thai in countries such as China. In 2008 he was honorably appointed Secretary of International Affairs by the World Kumite Organisation, one of the largest global karate organisations which invites Kyokushin fighters from around the globe every four years to compete in a worldwide championship.

01He now holds several qualifications in the fitness and martial arts industry, and so is both educated in martial arts practically and academically. His current focus is directed towards expanding our Melbourne Centre to incorporate a team of physical therapists to further aid our students with all of their needs.

02George Kolovos is endeavoring to continually expand and modernise martial arts to raise awareness and reward his students for their effort and dedication.

03Those fortunate enough to train with Shihan will only rave about the excitement associated with training alongside a man who demands hard training and bring out the true Kyokushin spirit in all who step through the doors of the gym.